Why would you want to know the layer 2 path when you can find the layer 3 path? On your LAN you won't see a hop across layer 2 switches because they are on the same broadcast domain so a traceroute just shows the IP of the end point.

What if you have redundant layer two links and you want to verify that the packets are taking the best path? In the next example we had just installed 10Gb capable 4500x switches and new fiber. The 1Gb link was still in place (it's not shown in the diagram) and I wanted to show the customer that the packets were taking the 10Gb link. 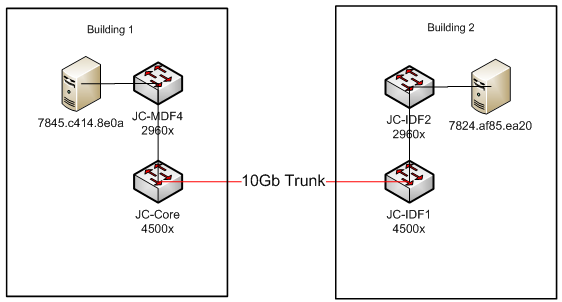 I ran the trace from the 2960x in building 2 using the MAC of the server as the source. The destination was the server in building 1 connected to the 2960x. I included the det(ail) parameter so that it printed out the switch type.

In the next example the trace failed! The failure message was pretty cryptic -
Multiple devices connected to destination port
Layer2 trace aborted

What does that mean you ask. So did I and luckily the Cisco document in the references had a good explanation:

In this case there were a couple Cisco SF200 switches connected to port 24 of a 2960x in the MDF. I hadn't done a "Sh cdp ne" since connecting the 2960x to the customer's existing network and didn't know they were there. 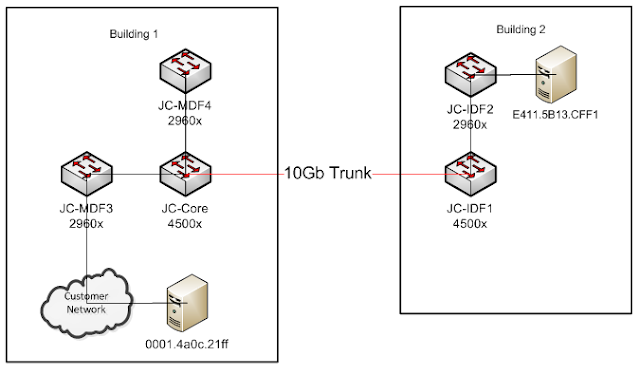