Updated January 22, 2022
There are so many IT security resources on the Internet that it would be impossible to document them all. I curate this page roughly monthly with new things I have found.
I hope you find something that you didn't know about!

IP Addresses for use in Documentation

Before I get started on resources, I want to talk about some little-known IP address blocks. Have you ever been watching a movie or TV show where they have a hacker banging away and they show IP addresses like 355.290.400.12?  It really turns me off on the show or movie when that happens. Think CSI-Cyber!

So, when you are writing a blog on some new nmap script you discovered use one of these blocks!
IPv4 Address Blocks Reserved for Documentation
If you are doing an IPv6 document the /32 range that has been reserved for documentation is: 2001:0DB8::/32
IPv6 Documentation prefix

There are so many good security sources on Twitter it's hard to keep up with the tweets!

My feed is @rikosintie and it is about 95% IT security info.

I listen to these podcasts on a regular basis. Any podcast app should be able to find them. It is surprising how much you can learn for free by listening to podcasts.

Cisco Best Practices to Harden Devices Against Cyber Attacks Targeting Network Infrastructure Cisco is aware of the recent joint technical alert from US-CERT ((TA18-106A) that details known issues that require customers to take steps to protect their networks against cyber-attacks.

Cisco Guide to Harden Cisco IOS Devices - The three functional planes of a network,  the management plane, control plane, and data plane, each provide different functionality that needs to be protected.

Cisco TAC Security Show Podcasts
The Cisco Security TAC guys do an occasional podcast. All of them are worth listening to but these three are mandatory in my opinion!

I have started deploying a lot of Aruba gear. I am starting to get into the Aruba flow and really like Clearpass and their security products.
Aruba Network Security Essentials for the Intelligent Edge!
Aruba Network Security Fundamentals Webinar - This requires registration but is a 2-hour presentation.
I am also creating a "Cookbook" of Aruba configurations on my github at Aruba Cook Books

It's a Microsoft world in the enterprise and you will need to know how certain Windows technologies work to secure or attack Windows machines.

How I became a password cracker - A good ARS Technica article on using HashCat.

Hashcat home page - Be sure to read as much of the wiki as possible. There is a wealth of information in the wiki.

Below is a great three-part blog series on cracking IKE on Cisco ASA. If you are responsible for securing a VPN (Cisco, SonicWall or other) you should read these posts.

Make sure you know how to use this!

Using RADIUS or TACACS for device authentication is a Cisco best practice. Here are two links that discuss the weaknesses in the RADIUS protocol:
An Analysis of the RADIUS Authentication Protocol
What is a RADIUS server?

And one on using an evil twin to get 802.1x password hashes
Cracking WPA2 Enterprise wireless networks with FreeRADIUS WPE, hostapd and asleap & John the Ripper

A Case Study in Attacking KeePass - A great blog on attacking KeepassX with Powershell and hashcat 3.0.
KeePass Cross-Platform Community Edition - A new fork of Keepass. KeepassXC has support for Yubikey.
Powershell to find KDB files - I wrote a simple Powershell script to find Keepass database files on all attached drives on a Windows machine.

My first Python script was a wrapper for my most used nmap scripts. It saves me a lot of time when I'm scanning for specific information. It's free/Open Source and available here: Python Wrapper for nmap
I also recommend subscribing to the nmap mailing list. It is very active and you will get advanced notification of new scripts and ideas for nmap. Subscribe here: https://nmap.org/mailman/listinfo/dev

Microsoft open-sourced its scripting language called Powershell. For a security professional this is good news as you can write a script and run it on Windows, macOS, or Linux.
Installing Powershell
Windows
Powershell is built-in, simply tap the Windows key, type Powershell select the PowerShell terminal or the PowerShell ISE.

Linux
On Ubuntu, I prefer to use snapd for installing PowerShell. Simply open a terminal and run
sudo snap install code --classic
Microsoft has instructions for installing using APT at this link - Installing PowerShell on Linux
Microsoft instructions for installing with snapd
Running PowerShell
After you have Powershell installed, open a terminal and enter pwsh.
macOS
I have a blog on installing and using PowerShell on macOS here
Now that you have PowerShell installed you can use this script from Black Hills Information Security on macOS, Linux, or Windows to check open outbound ports.
You can read about it here
Running Powershell on macOS
Open a new tab in terminal and enter:
pwsh
Here is a link to a simple PowerShell script I wrote to create DHCP reservations for printers. It ran perfectly on macOS:
Printer-DHCP
A simple script to create DHCP reservations for a Windows Server.
Today I needed to create DHCP reservations for some Access Points. I had the script above but I wanted to read the data from a CSV file. Here is the script modified to read the data from a CSV file.
I created an Excel sheet like this: 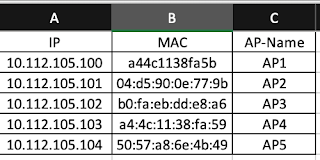 Notice that the first MAC address doesn't have colons. When I get an asset sheet from my office the MAC addresses don't have colons. The script removes colons if they are there.
Here is the output:
I know that you could do the same thing in Python. But most customers are on Windows and Python isn't installed by default but PowerShell is. If you use PowerShell you can give the script to any Windows user and they can run it.
Note: Guido Von Rossum, the inventor of Python, now works at Microsoft! Maybe Python will be installed by default in the future.
Using Visual Studio Code to create PowerShell scripts
The PowerShell ISE isn't available on Linux/macOS but Microsoft has a plugin for Visual Studio Code. The link to how to install the plugin is in the references below.
This article gives some tips on writing PowerShell scripts that work on Windows/Mac/Linux
Tips for Writing Cross-Platform PowerShell Code
This blog was my motivation for learning some PowerShell
A Case Study in Attacking Keepass
I extended Matt's script to look at all mounted drives - Hard drives, USB flash drives, network shares. During testing, I mounted some old flash drives and laptop drives. I found 8 or 10 keepass databases that I had thought were lost forever
Reference
Installing PowerShell on macOS
Powershell Template Development
Using Visual Studio Code for PowerShell Development
read data from csv file using PowerShell and store each line data in an array
Manage Windows Firewall with PowerShell
Oh My Posh - Similar to Oh My ZSH for Powershell
You need to install Nerd Fonts to use POSH
PoSh-R2PowerShell - Rapid Response (PoSH-R2)... For the incident responder in you!

ESXi is the most popular Hypervisor in the enterprise. VMware has a module for PowerShell called PowerCLI. It exposes almost everything that you can do in VMware. I have used it to slipstream a RealTek network driver into the installer so that I could use a NUC like computer to run ESXi.
Connecting to a vCenter server

Top Five Ways SpiderLabs Got Domain Admin on Your Internal Network
Scapy and Snort, Packet Peanut Butter and Jelly - Packet creation and SNORT sigs
So You Want to be a Hacker 2021 edition


SANS Articles
Finding the Clowns on the Syslog Carousel
Egress Filtering? What - do we have a bird problem? - Why you should block outbound ports
Who inherits your IP address? - Along these same lines, when you decommision a server that had rules on the firewall, make sure you delete the firewall rules. I have seen an internal server exposed to the Internet by mistake this way.
Who owns your typo?
Let's Trade: You Read My Email, I'll Read Your Password!
Administrator's Password Bad Practice

These are all Kindle books. I like a good thick paperback book as much as the next IT guy but with Kindle books, I can carry my complete library with me on my iPhone, iPad, or laptop.

In The Hacker Playbook Peter covers Google Dorking in depth. If you haven't bought it yet here are a couple sites that will get you up to speed. The Google Dorking skills will make your searches much more productive. Recently, I scanned a website with a
Google Dork - A tech target intro to syntax
Google Hacking Database (GHDB) - Huge database of Google Dork commands
Advanced Google Search Tricks - A very good article on Dorking

For example, if I want to search for PDF files but only on flowserve.com  I can enter

The results will be any PDF file that is on the flowserve.com
You can use just the site: or just the filetype: keyword depending on what you are searching for.

I made this a separate category because most of the IT security websites and blogs focus on penetration testing and vulnerabilities. The sites in this list are focused on making you invisible or less visible on the Internet and protecting your privacy.

intel techniques - This is Michael Bazzell's site. He has a podcast on privacy that is very good. Michael and the host's/guests take it to a level that is way beyond what I need but I almost always learn something useful on each podcast.

Custom Linux builds for privacy - They did a podcast for privacy-focused Linux distros. They discuss Buscador along with other distros.

Troy Hunt's have I been pwned -  A site where you enter your email address and it checks to see if you are in any of the breaches that Troy tracks.

hacked emails - A site similar to Troy Hunt's "Have I been Pwned". It never hurts to have options when it comes to checking your email addresses for breaches.

Compromised Accounts for OSINT and Digital Security - One of Bazzell's blogs on email breaches.

GRC SSL Cert Fingerprints - More and more companies are using Man in the Middle (MiTM) appliances so that they can inspect TLS encrypted traffic. This site will display the finger print of the site's certificate and let's you determine if a MiTM appliance is in use.

sync.me - An app to detect spam calls. Also allows you to look up unknown numbers from calls and texts.

Private Internet Access - A VPN provider. You should NEVER use the free WiFi at coffee shops or airports without a VPN. There are a lot of VPN providers now but a many of them are new and untested. PIA has been around for a while and has a good reputation for NOT keeping logs and accepting anonymous gift cards from Starbucks, Walmart, BestBuy and 100's of others for payment.

sudoapp.com - From the home page "Have up to 9 Sudo avatars for free. Each includes a custom phone number, email address, private browser and SudoPay virtual cards."