Here some of the resources I used to start learning python. I am not a programmer but with these resources and some Google Fu I have been able to automate several network device tasks. You can find most of my python scripts at github.com/rikosintie.

Why You Should Learn Python

A lot of the tasks that network engineers perform are repetitive, mind-numbing and error-prone. With a little python skill, you can automate these tasks and spend the time you save on more productive tasks.

As networking moves away from the cli and into software-defined networking (SDN) you will need to have some dev skills. Cisco has a three-part video on how the network engineer's job is changing. You will need to register with Cisco Devnet to watch it but you should have a Devnet account if you going down this path:
Lesson 1: The Network Engineer of Old

If you have never used Python at all this blog is the place to get started!

There isn't much needed to use Python other than python itself but like most things, life is easier with some tools.

IDEs are tools that allow you to write and debug code. Once you start writing scripts that are more than a few lines long you will want to use an IDE.

Thonny - Python IDE for beginners. A free Integrated Development Environment. This tool is great for learning. It lets you step through a script and see exactly what is happening.

MU - a simple Python editor for beginner programmers. This one is really nice. It's cross platform and has support for Linux, Mac, Windows and Raspian. What separates it from the other tools listed here is the support for small devices like Adafruit and Micro:bit. Here is a screen shot of MU starting up: 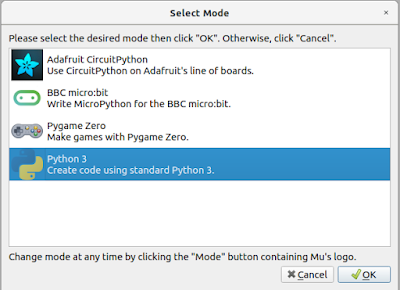 Microsoft Visual Studio Code - A free open source IDE from Microsoft. This one can be used for any size project. It has an integrated debugger that looks just like the Powershell ISE tool. It supports almost every programming language, not just python.

Sublime text - Sublime is a text editor that is optimized for programming. It has a huge community around it and thousands of plugins. It's $75.00 but the license lets you run it on as many machines as you own. I bought it and installed it on my Linux, Windows and Mac laptops. It has a tabbed interface like notepad++ which I like. You can also split the screen and open two files side by side. This is useful because you can have you script on one side and the data file on the other.

Realpython.com sells a great tutorial that walks you through installing Sublime text optimized for Python. It includes video and text for Mac, Linux, and Windows. This tutorial is well worth the cost and has improved my productivity in Sublime.
In the next section, i discuss revision control with Git. Sublime text has several plugins that integrate Git into your workflow.  One I really like is Git Gutter. It puts a + sign next tonlines that have changed and lets you revert easily if the change didn’t work.
Your Shortcut to a Professional Python Development Setup

Git - A revision control system. It's useful once you start writing scripts large enough to have bugs or future enhancements. Even if you don't program in python it's worth installing git because of github.com and gitlab.com.

Both of these sites have thousands of python tools. If you have git installed on your computer all you have to do to use them is "git clone <repository>". For example, to install the ARP sorting tool I wrote, you simply go to https://github.com/rikosintie/ARP-Sort and click the "Clone or download" button. It will display the url for the project. Click the copy button, type “git clone” and the URL you copied into the terminal, then press enter:
git clone https://github.com/rikosintie/ARP-Sort.git

This downloads the project and unzips it into the folder ARP-Sort. 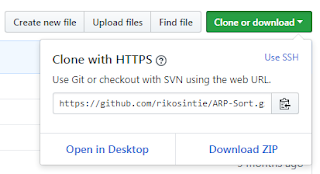 Udemy has inexpensive video training for Python, Linux, and a lot of other applications. These are on sale all the time for $9.99

I find that I learn better when using books and websites but sometimes it's nice to watch a video.

Subscribe to HackerSploit on Youtube and there is a complete series on Python. He uses 2.7 but it is still a good tutorial. They are really basic but I find Alexis entertaining.
Python For Ethical Hacking - #1 - Introduction & Python Modules

I love the Kindle app on my laptop, phone and iPad. If I get stuck in a long line I just open it up and do some studying! These were all under $5. You can go to Amazon, set filter to Kindle store and enter "python programming free book" and find a lot of free books.

There are so many python websites, here are a few I have found very useful:

You probably won't learn much coding from a podcast but these are very interesting to listen to. I find a lot of good links in the show notes. For example, I learned about Thonny, MU, and Visual Studio Code from podcasts.
Talk Python To Me - A good podcast that covers a lot of topics. There will be one called "Teaching Python to network engineers" in August, 2018!
Podcast.__init__ - A podcast about Python and the people who make it great. Hosted by Tobias Macey.
Python Bytes - Python Bytes podcast delivers headlines directly to your earbuds. If you want to stay up on the Python developer news but don’t have time to scour reddit, twitter, and other news sources, just subscribe and you’ll get the best picks delivered weekly.

There are 33 keywords that should never be used as a variable, function name, class, object, or as any other identifiers in your programs.

Pint - Pint is a Python package to define, operate and manipulate physical quantities
Posted by @rikosintie at 11:34 PM